Rotoscoping is one of the oldest animation techniques that allows producing realistic footages. Traditionally, animators traced over motion picture footage, frame by frame. In the visual effects industry, the process, even though similar, has a different purpose.

Rotoscoping is mostly used today to create a matte or mask for an element, so that it can be extracted and placed on a different background. It may even be masked out to change colours or any other set of reasons. It is widely used than you may realize. Rotoscoping helps filmmakers create scenes that would otherwise be impossible, challenging, expensive, or dangerous to produce in real life.

Read on, to find out about the industries that employ trained, skilled and certified rotoscoping artists for various job roles.

VFX studios
In bigger VFX companies, rotoscoping artists are sometimes attached to a show along with a Compositor or 2D Lead to direct them on the projects. If not on one show, then their services are used on different shows that the company is in charge of. In smaller companies, the roto artists gain experience by being a Junior Compositor and doing their own roto and prep work along with the compositing work.

Film Production Houses
There are more things than you can imagine that goes into the making of a film. Rotoscoping artist are often required at film production houses. Something as simple as tracing hair on an actor’s head is done by them. Even with the availability of advanced digital technologies, the makers of Guardians of the Galaxy used traditional rotoscoping techniques by using footage of a real racoon called Oreo to bring ‘Rocket’ to life.

Animation Companies
It was the legendary filmmaker Max Fleischer who invented the technique of rotoscope back in 1914 when he animated Popeye The Sailor and Betty the Boop. A few years later, when Disney used the footage to get a sense of a character’s movement, instead of tracing over the live-action footage. Many animators have come up with their own style of rotoscoping through over the years. And is still being used to create a variety of animated assets.

Gaming Companies
Game developer Jordan Mechner of Smoking Car Productions invented digital rotoscoping while creating the adventure game The Last Express. He had even used rotoscoping in his previous game projects Karateka and Prince of Persia. Since then, the gaming industry has always been another important sector where rotoscoping artists can build a career in.

As Rotoscoping continues to be a vital process within the animated and live action film production pipeline, there is huge demand for skilled roto artists. By completing a Vfx Film Making career course and getting the right skills, you can get hired by some of the top companies in the above-mentioned industries.

Whether you are an aspiring VFX professional or a superhero movie enthusiast, you are here because you are impressed by the visual effects of the original MCU series, The Falcon and The Winter Soldier.

The MCU, for more than a decade has been carrying the Torch of legendary CGI epics. But lately they have been trying to shift your attention from heavily CG-ed wars to grounded and realistic TV series like The Falcon and The Winter Soldier. These shows have given us CGI scenes so perfect that none of us could have ever doubted it to not be real. From the aerial chase in the first episode and a few others that we would be exploring shortly. And who other than Weta Digital could have been trusted with such epic sequences amidst the global pandemic!

The show received a total of five award nominations including a nomination for a 2021 Primetime Emmy for Outstanding Special Visual Effects. The VFX team involved was supervised by Charlie Tait who alongside Eric Leven have been part of the Weta digital team for over two decades. You may not have heard his name but we are pretty sure that you would have enjoyed his work, which includes Avengers: Infinity War, Deadpool, Alita: Battle Angel, and Game Of Thrones Season 8. K

Meant for theaters, the production had a blockbuster budget with each of the six episodes reportedly costing $25 million and featuring a total of 2,500 visual effects shots.

Here are our top 3 favourite breakdowns of the VFX shots:

Madripoor
Establishing shots of Madripoor were entirely CGed with Hong Kong as the key reference for it. The uniquely shaped sky-scrapers and the dense slum was a mixture of on-set special effects and VFX. It’s amazing how they could show the stark contrast between the slum life and the riches all through CG, since Madipoor was essentially a pirate city.

Canyon chase sequence
It was the first of the sequence to make us realise the brilliance of MCU’s execution of fight scenes. But what makes it unique from the ones we saw in the movies was the different visual language using the GoPro mount.

Some scenes had digital doubles of both Anthony Mackie and Sebastian Stan. And since they have been in the MCU for a long time, they have become a few of the recognisable faces in the industry. Thus there wasn’t any room for the slightest of the mistakes in creating their CGs.

Truck battle
The trucks were absolutely stationary! The only thing moving was the CGI-Ed road. The road was moved at the required speed (120km/s) while adding bits of rocks, dirt and dust being kicked up subtly to enhance realism in the scene. In addition to that the sequence was shot in Atlanta (USA) and thus sign boards and surrounding environment was required to be transformed to that of Germany.

Marvel is stepping up the game for other superhero franchises like The Boys (Prime) and the DCEU. We believe there are much more surprises waiting for us in ‘Doctor Strange: Multiverse of Madness’.

Have these action-packed VFX sequences inspired you to join a career course in VFX? If yes, wait no more. Check out this VFX Filmmaking course.

Unlike the olden days, creativity is now swiftly transitioning itself to digital. And in this era the price of software, hardware, and related camera equipment to capture creativity is relatively inexpensive. So much so that anyone with aptitude can learn VFX by joining a career course with a reputed VFX institute. The VFX industry is gaining traction and is becoming competitive for those who want to make a career in it.

In this article, we will discuss the two major questions that most VFX career aspirants ask, “Is it absolutely necessary for me to join a professional VFX institute to learn visual effects? What skills must I gain to become a VFX professional?”

Should You Join a VFX Institute?

In simple words, yes! Today, most recruiters value skills over qualifications. Even though one can learn VFX and CGI using free open source software like Blender, there are loads of other benefits that an institution provides. To know the intricacies of the field, one has to be involved with others who have mastered the game, and for whom it is not just some hobby. Rarely will you find others with whom you can collaborate at such a high level, for free, for extended periods. VFX training institutions are one of the few places where you can connect with others with similar passions and goals.

Apart from that, when you join an institute, you follow an industry-relevant curriculum, get assistance and advice from experienced faculty, develop social skills, gain hands-on experience through projects, and create your own demo reel. Most reputed institutions offer placement assistance thus boosting your chances of landing a job immediately after the successful completion of your course.

It is true that VFX and design are skill-based industries. Your portfolio and reel speak for you. Companies will look at your past experience, your showreel and will probably talk to people who have worked with you when they are considering you for a job vacancy. Venturing out alone as a VFX artist without any job offers at hand could be overwhelming and exhausting. When you are a part of a training institute, you will get ample guidance during every step of your journey to a VFX career.

What VFX Skills Should You Gain?

As for the skills needed, start with the basics such as digital illustrations, storytelling, and anatomy study. As your course progresses, you will start learning more complex concepts such as character design, audio-video editing, rotoscopy, matchmoving techniques, compositing, pre-visualization, and VFX filmmaking. Consider learning some of the most in-demand software such as Nuke, Blender, Houdini, and Autodesk Maya.

With the right skill sets and hands-on experience, you can start a career in the VFX industry in no time. All the best! Arena Animation Sayajigunj officials told the institution is looking forward to an aggressive hiring of 3750+ job openings for season ahead. Prospective admission seekers are requested and suggested not to lose a year and opt for admissions at the earliest to be in line with the current academic year.

Atit Patel comes from a small town called Halol after his initial attempt in the field of Engineering he realized that This is not He can Pursue as a Career Making Choice and Started Looking for Other Options. He always had an Interest in Watching Movies and was Curious about its Process keeping this in Mind He Decided to Pursue his Studies of Editing and Compositing with Arena Animation Sayajigunj.

He had no Designing study background But that wasn’t going to stop Atit. As he learned new skills, his confidence grew. Today, he is honing Editing – Compositing skills. He was Groomed and Trained from the Center for a good Job Opportunity as He was selected as Motion Graphics Artist in BYJU’s in Bengaluru and Continued to Excel and Perform as He Considered this as his dream Job and Now He Is Settled and Growing Steadily with his Profile and work. Genuine transformation isn’t easy, but Atit Patel shows us it’s possible. He Always Consider Arena Animation Sayajigunj as a Guide and Turning Point of His Career and Life. 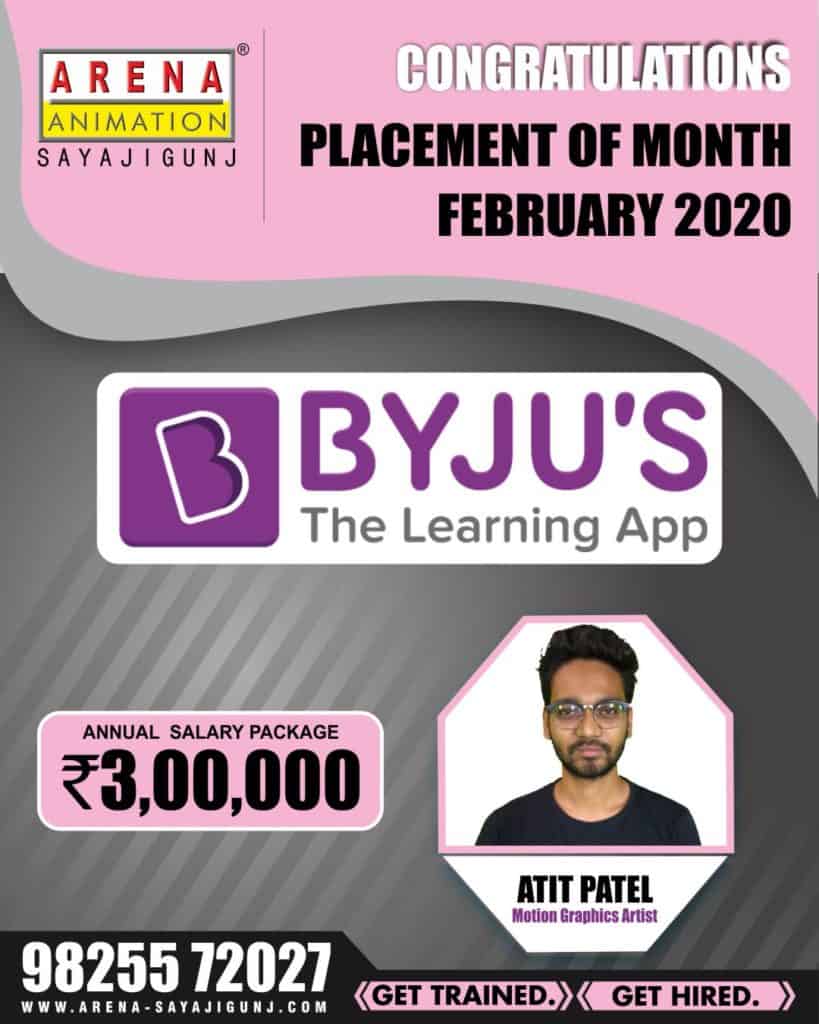 We have sourced some very good candidates from the Arena Animation Sayajigunj. We were amazed by the immense talent and skills these students possess. Not only the students we were very impressed by the quality of education and training the institute has provided them. The students were confident and very well prepared for the interviews. We wish to congratulate all the students for their future.   — DipakPillai (Think Tank Advertising)

Our association with the Arena Animation Sayajigunj has been very fruitful. We have been able to pick out some very capable and confident students for our company. We are very impressed by the hard work that has been done on these students by the teachers. We would love to come back here for placements again. –ShwetaUpadhyay (Dream Foot Studio)